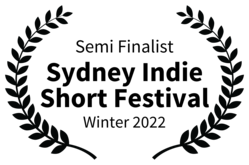 It is remarkably gratifying to continue to be recognized and awarded around the world for this important and heartfelt film on educational reform. “

PARIS, FRANCE, January 10, 2022 /EINPresswire.com/ – Revolution-Edu the sincere tribute to Sir Ken Robinson is an official selection at the Sydney Indie Short Film Festival Winter 2022. Prior to this recent selection, the film was a finalist in the Festival Paris International Short Film. “It is remarkably gratifying to continue to be recognized and awarded around the world for this important and heartfelt film on educational reform,” said filmmaker Maclovia Martel.

The short documentary pays homage to the life and contributions of Sir Ken Robinson, one of the world’s purest voices calling for an educational revolution. Robinson, who grew up in a working-class family in Liverpool, was the most articulate and passionate voice to empower children and inspire their creativity. From 1985 to 1988, Robinson was director of the Arts in Schools project, an initiative to develop arts education in England and Wales. The project worked with over 2,000 teachers, artists and administrators in a network of over 300 initiatives and influenced the formulation of the national curriculum for England. His three TED talks on the importance of creativity in education have been viewed over 80 million times. Robinson died on August 21, 2020, at the age of 70.

The film Revolution-Edu was officially nominated for Best Short Microphone at the Los Angeles Indie Short Festival. It was also an official selection of SXSW EDU, the Liverpool Film Festival and the ‘Imagine If …’ event founded to honor Sir Ken Robinson and inspire everyone to imagine the extraordinary.

About the Sydney Indie Short Festival

Sydney Indie Short Festival is a seasonal online film festival. The festival is dedicated to international short films of all genres, aiming to find new voices and perspectives to celebrate the power of a good story. The festival is open to all genres from all countries. Submitted projects are judged in private screenings by a random team of invited experts from academia and the region’s film industry. In the pool of the official selection, which enjoys a very competitive acceptance rate, SIFF has chosen the nominees and winners of the edition.

About the Paris International Short Festival

Maclovia Martel is an LA-based screenwriter and documentary maker. Trained at Otis College of Art, she majored in art. Using everything she encompassed through school shorts, music, and her fine arts training, she began making documentaries and writing plays.


The priority of EIN Presswire is transparency of the source. We don’t allow opaque clients, and our editors try to be careful to eliminate bogus and misleading content. As a user, if you see anything that we missed, please bring it to our attention. Your help is welcome. EIN Presswire, Every’s Internet News Presswire â„¢, tries to define some of the limits that are reasonable in today’s world. Please see our editorial guidelines for more information.