Emory University is considering a plan to transform the former Peachtree-Pine homeless shelter and most of its Midtown block into a new university center for sustainability and resilience.

The concept plan – which appears to save part of the historic shelter building while demolishing the rest for a public football pitch – was revealed in a video presentation on the new “Collaborative on resilience and sustainability” it was posted on youtube September 23.

The Collaborative Project on Resilience and Sustainability as it appears in a video presentation from Emory University. The view appears to show the block on the corner of Pine and Courtland streets, with what appears to be the front section of 477 Peachtree remaining in the back with a college branded facade.

“So what I love about it is that Emory comes to the heart of the city, comes and opens up a space that will be very community driven,” said Ciannat Howett, associate vice president of Emory for sustainability, resilience and economic inclusion, in the video. “It’s going to be really inviting for the community to come. “

Emory spokesperson Gana Ahn said the video presentation was an internal visioning session for faculty members and was mistakenly posted to the university’s YouTube channel for viewing by the general public. A written statement from Emory said the university intended to have the sustainability center somewhere in Atlanta, but the idea is still conceptual and another use could be to support the hospital. Emory Midtown University, which is across Peachtree Street.

“Emory University has not made any decisions regarding the use of 477 Peachtree Street and our plans are at the conceptual and visionary stage,” the written statement said. “Our goal is to convert as much of the site as possible into a dynamic new facility that meets Emory’s strategic needs for the future. All development will be respectful of the past.

“Emory purchased this property to make the university’s resources more accessible to the greater Atlanta community,” the statement continued. “It will support our academic mission through the arts, sciences and humanities. The facility can support Emory Healthcare services as the site is across from Emory Midtown Teaching Hospital. The Resilience and Sustainability Collaboratory is a functional program that will occupy space in a location in downtown Atlanta that has yet to be determined.

The plan discussed in the video – which is dated July 29 – is for the block bounded by Peachtree, Pine and Courtland streets and Renaissance Parkway. Emory purchased the refuge and several other nearby buildings in 2019. Howett said at least three other adjacent historic buildings will be saved and used for theater and art programs. The Shakespeare Tavern Playhouse is the only building in the neighborhood that Emory won’t own, Howett said, and it “will stay.”

Most of the buildings are around a century old, but have no formal historical protection. This includes the former shelter of 477 Peachtree, which began life around 1921 as a United Motors Services car dealership and sports a colorful Art Deco facade. Use of the shelter began in 1997 until it was forced to close in 2017 after years of battles with the city and neighbors over real estate conditions and interests.

The building was designed by prominent architect A. Ten Eyck Brown, who also designed the Fulton County Courthouse, Sweet Auburn Curb Market, and a Buckhead bookbinding building that was recently partially rescued from development. . Attempts to nominate 477 Peachtree for official city monuments have failed. Besides preserving history, another motivation for preservation today is that reusing an older building is generally more environmentally sustainable than tearing it down and building a new one.

Some local curators said they had inquired from Emory about his intentions for the building, but had not necessarily heard all the details of the “RSC,” as the university calls the facility in. abbreviated.

“It’s definitely a significant building in this part of upper Midtown,” said Mark McDonald, president and CEO of the Georgia Trust for Historic Preservation, adding that he had had a conference call with Emory officials. a few weeks ago due to rumors regarding the plan. “I have been in contact with Emory’s real estate department about this project on numerous occasions and let them know that the Georgia Trust considers it to be a very important building from the modern era of Atlanta…”

The Georgia Trust would be happy if the plan involved preserving the front part of the building, McDonald said, “because the front part contains the important Art Deco architecture.” 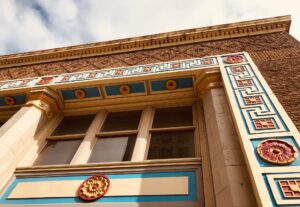 Close-up of the Art Deco design of the facade of 477 Peachtree. (File photo by Kelly Jordan)

David Yoakley Mitchell, executive director of the Atlanta Preservation Center, said he meets quarterly with Emory for updates on his various plans. “The Atlanta Preservation Center looks forward to the development of this space and a partnership with Emory to advance this structure and honor the legacy of this historic building and promote its sustainability,” he said.

In the RSC video, Howett said that sustainability and resilience are major new areas of study at US universities. The Emory version is a “think tank and action group” that will address a wide range of topics, including “climate, racial and health disparities,” she said, and will work directly with members and stakeholders. community groups. Some virtual programs are in progress, but RSC intends to have a physical location.

Howett called the Midtown location “truly a fantastic site” in part because it avoids the barriers to “bringing the community to [the main Emory campus in] Druid Hills – I mean, it’s just not realistic. 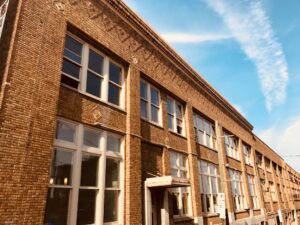 A view of the Pine Street frontage of 477 Peachtree. (File photo by Kelly Jordan)

Referring to a former barber shop and a former nightclub at 493 and 495 Peachtree, Howett said Emory hopes to “reuse [them] in the theater space, the gallery space, so that we can bring our professors engaged in theatrical studies and visual arts and other fields to work on the Collaboratory and its projects. She also noted, without specifying a future use, that 489 Peachtree is the former headquarters of Peasant Restaurants, a once famous Atlanta chain that disbanded 20 years ago; Co-founder Steve Nygren then created the Serenbe Environmentally Centric Planned Community in South Fulton.

The soccer field in the plan is intended to be part of “StationSoccer”, a program that creates pitches at MARTA stations and manages youth leagues. The program is run by a non-profit organization called Soccer in the Streets. “While there is no agreement between Soccer in the Streets and Emory, there have been exploratory and conceptual discussions on the site,” said Sanjay Patel, director of strategic projects for the association, in a written statement. MARTA is aware of these discussions but is not directly involved, according to a spokesperson for the transit agency.

The video presentation indicated that the RSC has a large number of corporate, nonprofit and government “partners” ranging from Google to the city of Atlanta to Trees Atlanta. The exact role of the partners was not explained by the presentation.