The first real-world test of a new microgravity sensor could revolutionize the detection of buried structures and underground hazards.

Unforeseen ground conditions remain one of the greatest risks facing construction projects. But imagine a future where that danger has been precisely reduced before a single borehole has been drilled.

Technology has been reducing risk in above-ground construction for decades, and now it seems that new tools to dramatically reduce risk below ground are just a few years away.

The possibility of this drastic change happening soon stems from the successful testing of the world’s first quantum gravity gradiometer outside of laboratory conditions earlier this year.

The utility tunnel detected by the final test was of known size and depth, demonstrating the accuracy of the sensor

Gravimetric gradiometers are already used to measure variations in gravity to detect buried objects, but existing methods cannot do this accurately.

These sensors use a mass on a spring in a temperature-controlled chamber to measure gravity. A particular challenge for existing gravity sensors is vibration – the sensor needs time to stabilize each time it is moved due to the vibrations created by the move.

If you have a void or a tunnel, there is an absence of mass and the gravity on this element will be less

This slows down the pace of the investigation. The equipment is also sensitive to environmental vibrations. Today, the application of quantum physics by the Gravity Pioneer research project has changed the game.

The team developed high-tech equipment which they used to detect the location and size of a known buried tunnel structure.

It may not sound groundbreaking, but the team describes it as an “Edison moment” in sensing technology due to the speed and accuracy it provided.

Unlike a conventional gravity gradiometer, the sensor uses free-falling atoms to reveal subtle variations in Earth’s gravitational pull. These variations are caused by differences in the density of the material under the sensor.

Current microgravity technology is limited by a range of environmental factors, particularly vibration

Inside the quantum gravity gradiometer, a cloud of supercooled atoms is released and a laser pulse splits each of the falling atoms into a “state of superposition” which effectively corresponds to where each atom exists in two places at that time. Due to their slightly different positions in the Earth’s gravitational field, the two versions of each atom are affected differently by gravitational forces. Another laser pulse recombines the atom and due to wave-particle duality – a rule of quantum physics where atoms can act like waves – the reunited atoms interfere with each other.

“It’s the phase difference between the waves that we measure with the sensor and it gives a very accurate measure of the gravity that the cloud of atoms experienced as it fell,” says George Tuckwell, RSK Division Director for geosciences and engineering.

According to Tuckwell, the quantum gravity gradiometer eliminates differences in gravity caused by factors such as the position of the sun, moon and distance from the equator, which affect the accuracy of existing gravity sensors. “What you’re left with are the subtle variations due to the structure under the sensor and that allows us to isolate and measure that,” he says.

“So if you have a void or a tunnel, there’s an absence of mass and the gravity on that feature will be less.”

According to the research team, analyzing material density differences using the sensor creates a “lens in the subsoil” in terms of accuracy. It is also expected to be 10 times faster than existing gravity survey techniques, which will reduce survey times for sites from a month to a few days.

The Gravity Pioneer’s successful sensor test is the culmination of four years of work and is just the beginning of the commercialization process.

“At the moment you need someone with a degree in physics to operate it and we are a long way from having survey crews able to take it to a construction site and use it day after day. day,” says Tuckwell.

The project was led by Tuckwell’s company working with the University of Birmingham and followed joint research they had previously undertaken.

“Gravity Pioneer’s funding came from the first round of funding for the government’s Strategic Industry Challenge, which focused on the development of quantum technologies and their commercialization,” says Tuckwell.

“RSK has been working on quantum gravity gradiometers as an emerging technology for several years and the funding gave us the opportunity to continue the work we were already doing with the University of Birmingham.

“The goal was to take the technology out of the lab by building test equipment using commercial components rather than custom components made by the university. Companies like RSK will be the end users once a commercial version is developed. , so it was important for us to lead the project to ensure that the sensor developed was the basis of a sensor robust enough for us to use.

Total funding for the project from UK Research & Innovation (UKRI) through Innovate UK was £6m and commercial partners added a further £3m to the project.

Funding for a three-year project was secured in 2018. After Covid-related delays, it was completed in February with the successful test, the results of which were recently published in a technical paper in the scientific journal. Nature. 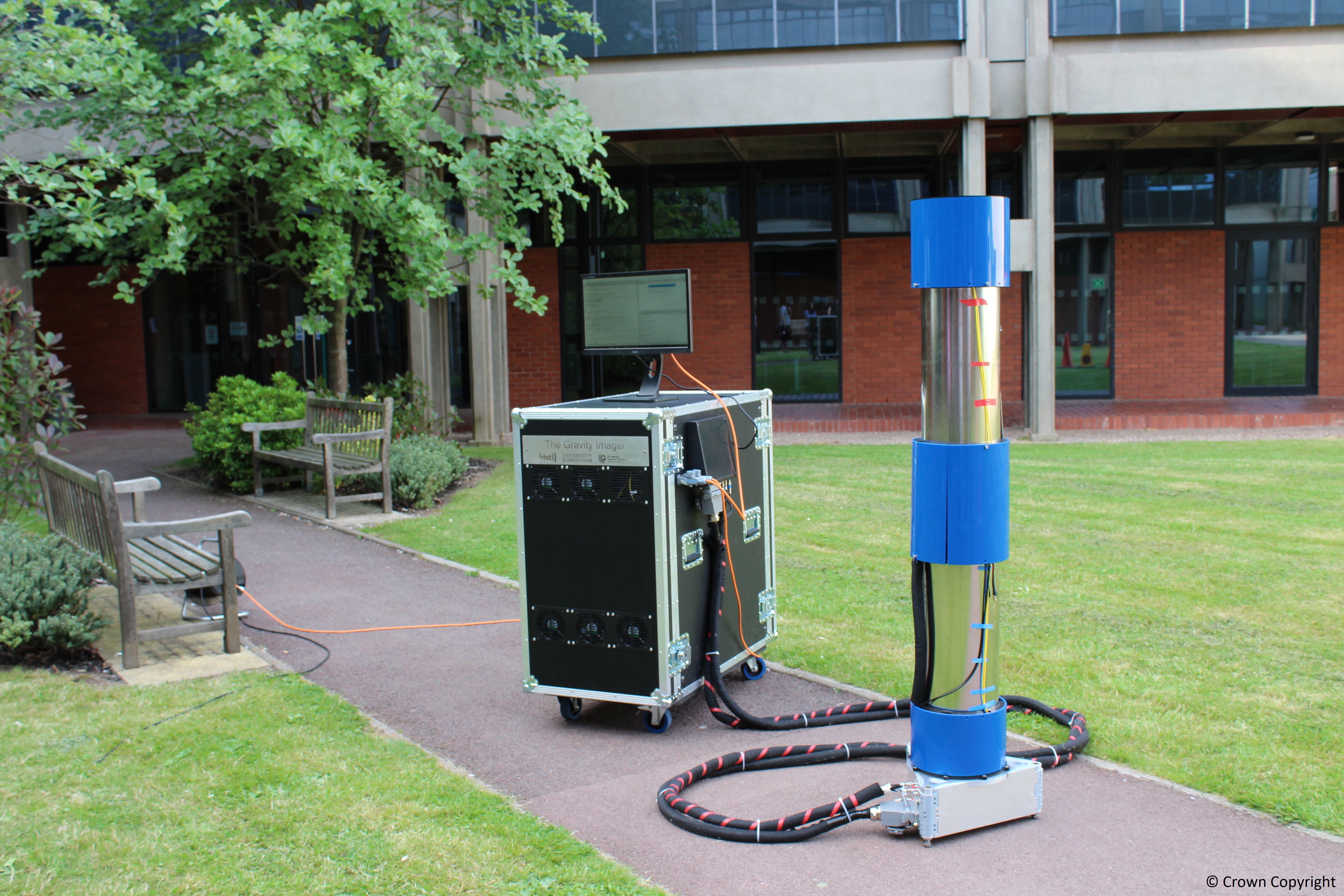 The final test was carried out at the University of Birmingham

Tuckwell describes getting to this point as a huge engineering and physics challenge.

“The physics behind the sensor had been known for some time and the technology led by academics, which was developed with funding from the Department of Defense research organization Distl and the EPSRC [Engineering & Physical Sciences Research Council]was lab proven before we started,” says Tuckwell.

“We needed to understand the lessons learned during this work to build an instrument using off-the-shelf components. Then we had to develop a supply chain to deliver these components to meet performance specifications and undergo environmental testing before being integrated into an instrument where all these components worked together.

According to Tuckwell, building the sensor to be portable was beyond the scope of the project at this point – making it work outside of the lab was the primary goal.

Creating a wearable design will come later, but he acknowledges that will be key to bringing the technology to market.

“At the start of the project, we thought about what would excite the industry about the technology coming – something small and portable that doesn’t measure gravity very well or something big and bulky that measures gravity. with precision,” he explains. Precision was the obvious choice.

There were five phases of testing outside the lab – known as field evaluation events – planned over the three years of the project.

“These were nerve-wracking, but essential learning events,” says Tuckwell. “During the first few, we weren’t measuring accurately, but we knew we were measuring gravity.”

Continue through system upgrades and troubleshooting and the final field evaluation test took place at the University of Birmingham grounds. The team used the Gravity Pioneer instrument to detect a utility tunnel under the site.

“It was a known structure and we were able to compare what we detected – depth and size – with the instrument with what we already knew was there,” says Tuckwell.

The results of the Gravity Pioneer were also compared to those of a conventional gravimeter. The results took a while to process, but it quickly became clear that, for the first time, there was a really clear gravity signal.

“A wave of excitement ran through the project team,” says Tuckwell.

Commenting on the success of the test, Kai Bongs, head of cold atom physics at the University of Birmingham, said: “This is an ‘Edison moment’ in detection. With this breakthrough, we have the potential to end reliance on bad records and luck as we explore, build, and repair.

“Furthermore, an underground map of what is currently invisible is now a significant step further, ending a situation where we know more about Antarctica than what lies a few meters below our streets.”

Tuckwell adds: “The business implications of significantly improved mapping of what exists below ground level are enormous, particularly for the construction industry which is likely to see reduced costs and reduced delays in construction projects. construction, rail and road.

“There are other geophysical survey equipment that can ‘see’ below the ground surface for construction and scientific projects. But current microgravity technology is limited by a range of environmental factors, particularly vibration, and can miss devastating underground events like sinkholes.

If these limitations can be addressed by the Pioneer Gravity Sensor, surveys can become faster, more comprehensive and less expensive.

How quickly the technology will arrive at a site near you depends on additional funding to fully market the instrument as a small, rugged handheld instrument that accurately measures gravity.

Tuckwell is optimistic that funding will be secured and the instrument could be available in three to five years. “The surveying market could be very different in 10 years,” he predicts.

Do you like what you read? To receive daily and weekly New Civil Engineer newsletters, click here.