The latest redistricting changes in Minnesota have left some House and Senate districts without an incumbent for the upcoming 2022 midterm elections.

For House District 5A, which now includes parts of Cass, Wadena, Hubbard and Becker counties, two candidates are seeking to fill that vacant seat. Republican Krista Knudsen of Lake Shore and DFL candidate Brian Hobson of Park Rapids both aim to represent 5A residents and address key district concerns such as education, crime rates, voter safety and a state budget surplus of over $9 billion. 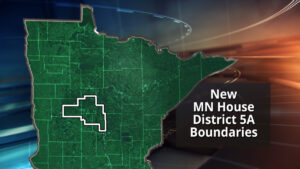 These are just some of the issues voters will be thinking about when they vote before or on November 8. Education is a big issue for some voters this year, especially when it comes to established standards and the degree of parental involvement. Krista Knudsen (R), mother of four and mayor of Lake Shore, says her children are the main reason she is running.

“I think we need more parental involvement. Now, more than ever, we see parents going to school board meetings, signing up for volunteer positions, showing up for the school board, just wanting to get involved,” Knudsen said when asked what should be the role of the legislature in setting standards and curriculum in the state. “When your child comes home from school and tells you some of the things that are being talked about…it’s alarming. I think a lot of parents need to put this into perspective and better understand exactly what is going on.

His opponent Brian Hobson (DFL), a third-grade teacher at Laporte, said his support for the current system and the way Minnesota’s standards are set by subject matter experts, legislatures, teachers and parents.

Another issue both candidates were asked about was the reported increase in crime in the state. Knudsen expressed support for local law enforcement.

“One of the best ways to fix this is to support our police officers. Here in Greater Minnesota, we do,” Knudsen said while mentioning the increase in law enforcement retirements in recent years. “[Officers are] retiring at a record pace; they leave the profession. We need to get people back into policing, into law enforcement.

Hobson, however, shared his thoughts on rising crime, saying he disputes these numbers and that one solution to this problem is to help, rather than hinder, those in need.

“The reason it may seem that way is that people are really struggling right now. And, the way to help is to help, not blame,” Hobson said, adding that one way to potentially alleviate this problem is to provide supportive housing or similar programs. “We cannot blame the poor for being poor. We need to help the poor to be less poor so they don’t have to rob their neighbors to survive. It’s a way to improve everyone’s situation.

With a reported surplus of $9.25 billion, these programs could be a possibility. But a top priority for today’s educator is to dedicate those funds to public schools and programs that would support both students and staff in the hallways.

“My primary focus is…public education…early childhood education and child care in general,” Hobson explained, deepening his thoughts even in tax reform efforts outside of the school district. “Of course, I’m interested in property tax reform for people in the middle, because it’s a hardship. And I also want to make sure that our seniors and seniors who receive social security don’t pay not necessarily taxes on [those benefits].”

Knudsen shared a similar agenda for where the exponential surplus might go.

“I think the number one priority for me would be to eliminate the tax on social security benefits once and for all,” she said before also discussing recent price increases due to inflation. “It is clear that we have this huge budget surplus. We are overtaxing the hard workers of Minnesota. This money comes back into their pockets. With inflation and gas prices…people need that money.

For some people, a specific issue up to the voting booth is the election and voter safety. Knudsen advocates a voter ID system, in which seven US states have strict photo requirements. Hobson, however, emphasizes the confidence he has in the way elections are run locally.

Whatever the reason or issue that leads someone to the voting booth or the ballot box, people in House District 5A will have the opportunity to voice their opinions on who they think will best represent them on the 8th november.