A day after rioters burned down a historic church in downtown Washington, then-President Donald Trump, Secretary of Defense Mark Esper and Chairman of the Joint Chiefs of Staff Mark Milley – dressed in ‘a military camouflage – walked through Lafayette Square and towards the burnt-out structure. .

Upon his arrival, the 45th president posed for photos outside St. John’s Church, holding a borrowed Bible, then returned to the White House.

Trump, an infrequent churchgoer who demonstrated a misunderstanding of scripture, faced no protesters that evening. They had been forcibly and violently removed shortly before.

The fusion of religious symbolism and military might has delighted many of its proponents.

Trump’s actions that day were a “not-so-subtle dog whistle to mobilize [support] — not for Christianity as a religion, but for populist nationalist ends,” says David M. Elcott, author of “Faith, Nationalism, and the Future of Liberal Democracy.”

The blending of the sacred and the secular was evident during the 2016 and 2020 presidential campaigns. In addition to red MAGA hats, Trump supporters sometimes sported “Jesus is my Savior; Trump is my president.”

Some of the people who stormed the United States Capitol on January 6 carried religious signs or symbols, including the Christian flag and “Jesus Saves” signs.

The cooptation of religion by politicians is not just an American phenomenon, says Elcott. Nationalist leaders around the world are adopting similar tactics, he says.

Increasingly, religion is being used “as a talisman of traditional culture,” Elcott’s book states.

The phenomenon is evident in Hungary, where Prime Minister Viktor Orban is proposing what he calls “Christian democracy” as an alternative to “liberal democracy”.

The goal, says Orban, is to preserve “ways of life that stem from Christian culture,” rather than “to uphold religious articles of faith.”

In the former Soviet Union, President Vladimir Putin attempted to merge Russian nationalism with Russian Orthodoxy, even building an armed forces cathedral some 35 miles southeast of the Kremlin.

Nazi tanks and other equipment were reportedly melted down and used as building materials for the project.

As Russia invades Ukraine, Putin and the Russian Orthodox Church have spoken with one voice in recent months, describing the assault as a righteous undertaking.

United States vs. THEM

Although religion is often touted in nationalist circles, the primary goal is not to save souls, Elcott’s book suggests. Rather, it is about separating insiders from strangers, “us” from “them”.

“Religious identity is a matter of belonging, not necessarily belief,” the book states.

Leaders of Alternative for Germany, a right-wing populist party, have made this explicit.

“We are not a Christian party,” the book quotes one of the group’s leaders as saying. “We do not seek to defend Christianity in a religious sense. … Christianity is but a metaphor for the customs inherited from our Fathers.”

Elcott, a professor at New York University, wrote the book with C. Colt Anderson, outgoing dean of Fordham University’s Graduate School of Religion and Religious Education; Tobias Cremer, junior researcher at Pembroke College, Oxford; and Volker Haarmann, chairman of the Department of Theology of the Protestant Church in the Rhineland.

The authors say it is important “to understand how religious identity is weaponized to fuel revolts against a political, social and economic order that values ​​democracy in a global, human rights-based, financially intertwined world. and surprisingly diverse”.

“In terms of political meaning, it is not about one’s belief or loyalty to church, synagogue, temple or mosque. Rather, it is about a secularized religion, of faith as culture, civilization and identity of belonging rather than belief, a way of defining the ‘us’ of authentic citizens against the ‘them’ who are foreign and dangerous”, they write, adding: “Ultimately, such use of religion has little or nothing to do with religious belief or practice”.

Jim Winkler, president and general secretary of the National Council of Churches, praised the book as “a passionate defense of wholesome and wholesome forms of religion that engender and protect democracy, human rights, and love of neighbour”.

Elcott, who is alarmed by the rise of nationalism, has more than an academic interest in the subject; much of his family perished in the Holocaust.

“It motivates me to defend, in an affirmative way, liberal democracy,” he said.

In the late 1980s and early 1990s, as communism crumbled and the United States was the sole superpower, many believed that democracy had triumphed and would triumph in the future.

The high tide of freedom, however, was fleeting.

Today, in much of the world, democracy is on the decline. He has enemies across the political spectrum, say the authors.

“Undemocratic political parties and governments are not the monopoly of right-wing movements,” they write. “In fact, attacks on democracy often seem quite similar whether they come from the left or the right.”

Faith in democracy has been shaken in recent years, the book suggests.

It turns out that globalization was no panacea for humanity’s problems, Elcott said in an interview with the Democrat-Gazette.

Leaders of liberal democracies have sometimes failed to recognize this fact, he said.

“[They] kept saying, “Aren’t we all benefiting from globalization? Isn’t it wonderful? “said Elcott.

For many Americans, the benefits of globalization are hard to spot, he said.

“Less than half of Americans have passports. They’re not citizens of the world. They don’t fly to different places,” he said. “They feel like their culture, their values, their norms are being shattered. And I think the liberal community just doesn’t understand that.”

If religion can be used to undermine democracy, it can also strengthen it. The authors say that “brave religious leaders and powerful theologies” will be needed “to counter the threats… [and] heal the haemorrhage of democracy.”

Then-President Donald Trump holds a Bible as he stands outside St. John’s Church in Washington, DC on June 1, 2020. A new book, ‘Faith, Nationalism and the Future of liberal democracy,” argues that “religious nationalism” is on the rise worldwide. (The New York Times/Doug Mills) 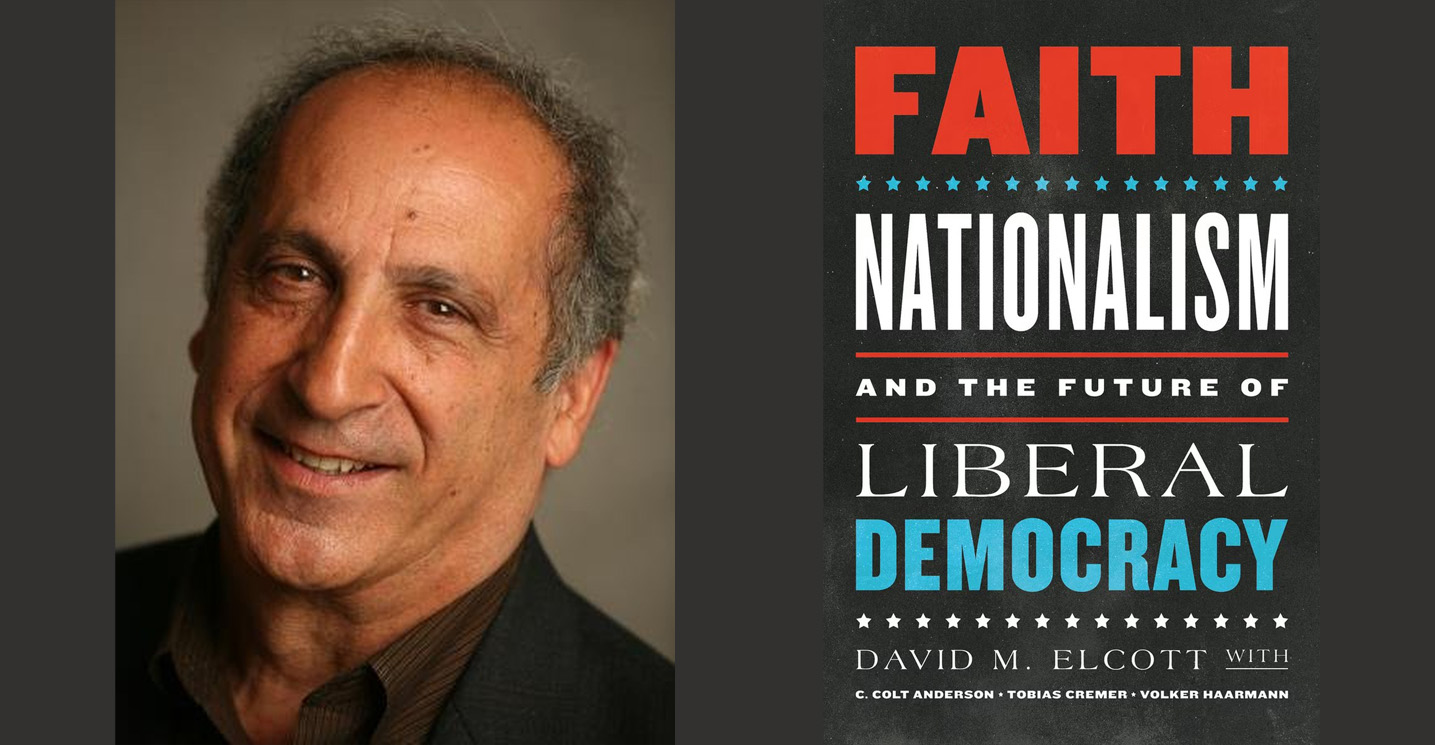 Left to right, David M. Elcott and a cover photo of his new book, Faith, Nationalism and the Future of Liberal Democracy.