FLINT, Michigan – Victoria McKenze has lived in the Sarvis Park neighborhood of North Flint for 45 years and counting. As an educator and apostolic bishop, she, her husband and eight children were among the first African-American families to settle in the area. Their house, built by a carpenter for his wife as a wedding gift, overlooks the neighborhood park.

The smell of fried fish and the sound of children running and breathing hastily, swinging from the acrylic light fixtures in the neighborhood park set the tone for a conversation rooted in history and education between McKenze, me- meme and photojournalist Jenifer Veloso.

Moving to the Sarvis Park area, McKenze remembers a woman who brought arts and crafts, games and activities for families. Although there are many elements of the neighborhood that she would like to see return, McKenze explains how nice it is. see the park revitalized. “I would like to see more police officers come and participate in activities with the children,” says McKenze.

During our interview, she takes us through a sensory memory of growing up in Flint and how that turned her into a resource for her neighbors and her community. The conversation moves from a deep reverence for fellowship and building his community to what drove McKenze’s passion for education and community in the first place.

“I experienced redlining. I experienced non-busing in the city of Flint and the downsides of redlining and how that might have conditioned my mind in regards to the education system or the most effective ways to be a solution-based person for our children.

Victoria McKenze rests her hands on her lap showing two rings of significance. One ring celebrates her Bachelor of Arts degree in Criminal Justice from the University of Michigan-Flint in 1995, and the other is for her Master of Divinity degree from United Theological Seminary in 2000.
The term “redlining” originated from actual red lines on maps that identified predominantly black neighborhoods as “dangerous”. Beginning in the 1930s, the government sponsored Homeowners Loan Company and the Federal Council of Mortgage Banks used these cards to deny loan and investment services to black Americans.

“I grew up in a multi-ethnic neighborhood. That’s what Elizabeth Street was like,” McKenze said. “The Germans owned the corner grocery store and the Italians owned a warehouse down the street on Industrial and Elizabeth. There were multi-ethnic groups throughout this community; from Hamilton to 5th Street.

Born and raised on Massachusets Street, McKenze remembers there was a road behind the water tower. “There were houses right along the river there where most black people lived in Flint,” she said. “We weren’t allowed to cross Dort Hwy. It didn’t matter that we had cows, chickens and vegetation. I remember when it came time to go to school, we had to move because my mother was afraid that I would cross the highway alone.

It was in the 1960s when McKenze recalls the Bus Bill passing. African-American families at the time were denied access to better facilities, better teachers, and better school tools. After the bus problems were resolved, ethnic groups in Flint were able to cross North Saginaw Street.

“Doyle Ryder was called Doyle Elementary when I was there,” McKenze said. “Unbeknownst to me, my kindergarten class was in the basement of the building next to a furnace. I remember Caucasian people coming to visit our class (dressed in black and white). They had visited the students, spoken with our teachers and left. The very next day, we were told that we would go to a new course. We walked up the stairs and it was like the sky was opening up. There were colors and there were people.

“We walked into a classroom that had desks and chairs and our names were on the desks. We had a place to hang our coats. We were in; as I know now, a classroom. 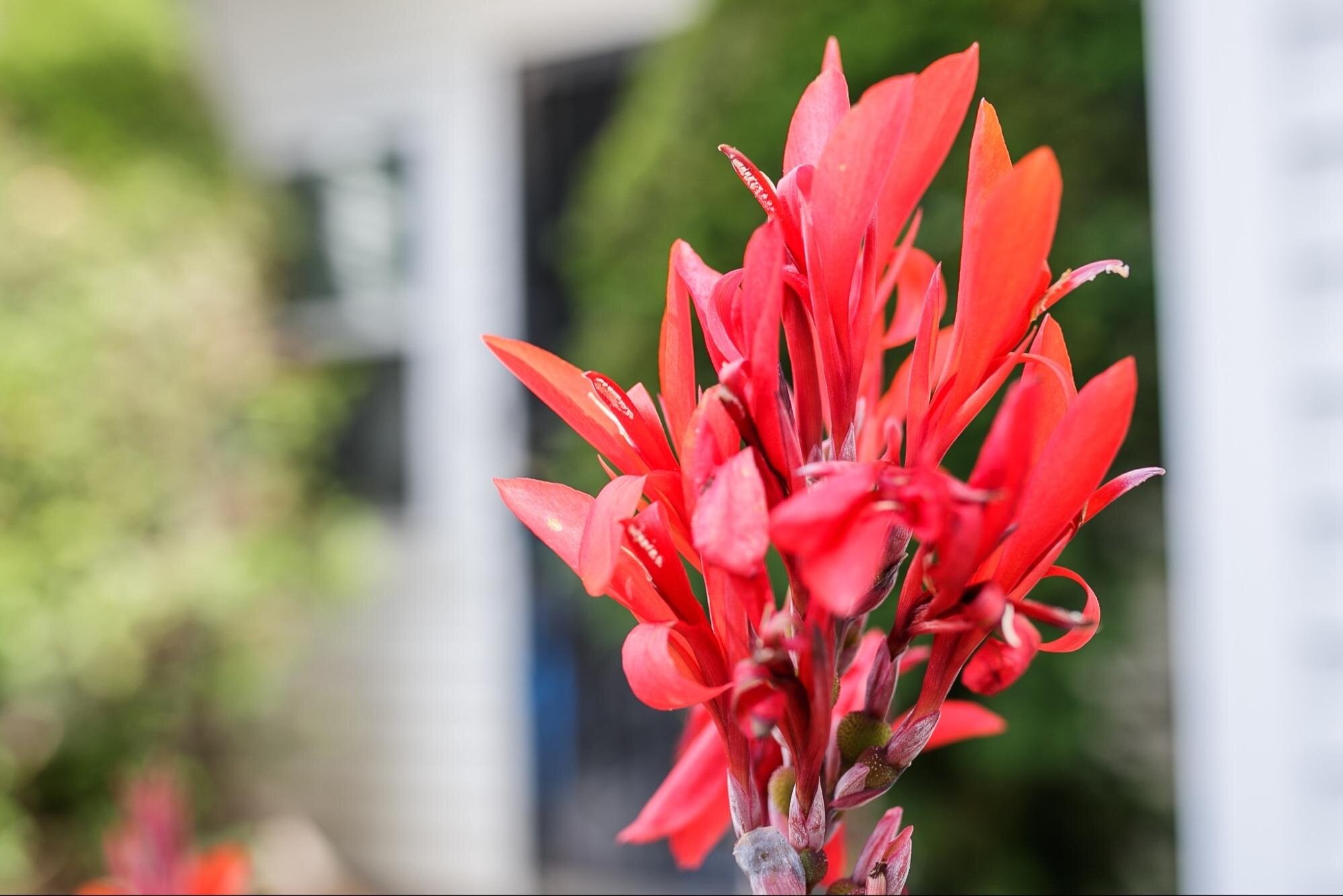 Jamaican canna lilies burst with vivid color outside Victoria McKenze’s home. She grows them in honor of her father-in-law who was an immigrant from Jamaica.Although there was improvement in her early studies, McKenze also experienced difficult learning conditions that prompted her to enter the field of education. “I met a 6th grade teacher who told me that I would never be anything more than an assisted mother,” McKenze explained. “I didn’t want our children to go through what I had gone through. It was enough for me to experience and remember those drawbacks and it made me want to change that narrative.

“I think Flint took away the power of being equally educated,” she continued. “At one time, Flint Schools existed on equal footing with passionate educators, resources, certified teachers, computer labs, and science labs. You didn’t have to go to a charter school. It was only when the money started to be allocated and distributed from above.

Along with changes in education, McKenze has also witnessed changes in homeownership with more rentals now than before. She explained how she could count the houses that were owners and the rest are rentals. However, she admitted that there is still a sense of community with those who own.

“We make sure to welcome new families to the area and let them know that whether they are homeowners or renters, this is what we expect as members of this community. The only reason I’m still here is because it’s still a safe place. The owners ensure that it remains a safe space.

When asked what community means to her, McKenze replied, “Community to me is when we are surrounded by people who not only live together but play together. We have concerts in Sarvis Park, and we have picnics. Because of our desire to make this neighborhood a pleasant environment, those who come here see and know each other a little better. I always make sure our new neighbors have a flyer so they know they’re invited! It’s like knowing when someone is sick, we will help the rest of the family. The community is a partnership.